In the mid-90s, construction at Walt Disney Concert Hall had come to a halt. Estimated costs of the building had increased to $265 million, well above Lillian Disney’s initial donation of $50 million. At one point, Los Angeles County was close to pulling the plug on the civic project. The building itself was little more than a steel skeleton.

It’s a far cry from the smooth Douglas fir columns and bright stainless steel curves that characterize Walt Disney Concert Hall today. The hall is undisputedly an iconic building: it’s one of the most recognizable concert halls in the world, thanks to Pritzker Prize-winning architect Frank Gehry. With its sleek, machine-inspired aesthetic working with the warm interior woods and floral patterns, the hall has pushed Los Angeles to the forefront of cultural destinations.

A City’s Philanthropy
In retrospect, it’s some kind of miracle that Walt Disney Concert Hall was completed. After near failure, the project picked up momentum again with a few donations from civic leaders such as billionaire Eli Broad and former mayor Richard Riordan. Each contributed $5 million toward the rejuvenation of construction. Broad, along with former Chairman of the Music Center Andrea Van de Kamp and County Supervisor Zev Yaroslavsky, took the lead in fundraising efforts, drawing in donations from major corporations like Arco and Atlantic Richfield Co.

Catherine Babcock, Vice President of Marketing & Communications at Music Center, saw the donations as a major turning point for the concert hall. “Many of these corporations made the single largest gifts they’ve ever made as corporations to the building of this concert hall,” she said.

More was at stake than just the concert hall. The project was a linchpin in the redevelopment of Downtown LA as a cultural destination. If the hall failed, it would have signalled to the world that Los Angeles couldn’t pull together to support its cultural community. But with Broad and others at the forefront, donations began pouring in. By the time the deadline for fundraising rolled around, Walt Disney Concert Hall had more than $100 million to complete the ambitious structure.

The Symbol of Los Angeles
Appropriately “Disney,” the change in momentum gave the story a magical ending, proving that LA could come together to create a civic icon. It was also a reminder that Grand Avenue was once called Charity Street.

“Ultimately the contributions created an icon that influenced architecture in LA and also philanthropy in Los Angeles,” said Babcock.

There’s no doubt that the concert hall has a lot of heart. People point to Frank Gehry making LA his home, that Walt Disney Concert Hall helped him become a major voice in American architecture, that he worked so closely with Lillian Disney to understand what she wanted for Los Angeles. Some note the signatures in the steel beams holding the concert hall together, an imprint of the steel workers during construction. Others point to the Los Angeles Philharmonic and the unsurpassed acoustic highlights of the concert hall.

Many look at what Downtown LA has become because of this historic building. Music Center showcases three other major cultural venues (The Ahmanson Theater, Mark Taper Forum and Dorothy Chandler Pavilion). Other Downtown cultural attractions include the Museum of Contemporary Art (MOCA), The Cathedral of Our Lady of the Angels and the Japanese American National Museum. The list goes on. In the middle of all of this sits Walt Disney Concert Hall, a symbol for Los Angeles and a testament to the cultural force of this city. All it took was 16 years, $274 million, 30,000 architectural drawings, 300 tons of bolts and welds, 12,500 pieces of primary steel — and a whole lot of heart.

Tree Columns
As you step inside the Ralph M. Parsons Foundation Atrium Hall, you’ll notice the large columns clad in Douglas fir. Although aesthetically pleasing, the columns contain the inner workings of the building and deliver air conditioning and lighting to the main lobby. The “tree trunks” are an example of Walt Disney Concert Hall’s dialogue with nature. Throughout the hall, you’ll see how architect Frank Gehry has incorporated Lillian Disney’s love of gardening. She once told Gehry that she wanted the hall to feel like a little old cottage in England covered with vines. It was at that point that Gehry finally understood how to incorporate her wishes into the hall. In addition to the tree trunks, you’ll find examples of this in the floral patterns of the fabric (named “Lillian”) and flowering motifs throughout the public garden area.

Steel Elements
Many people are surprised to discover that Gehry originally wanted the hall to be covered in stone. He changed his mind after some time (and prodding by civic leaders) — and decided to go with stainless steel. All the curves that Gehry envisioned made the building an extremely difficult one to construct. Gehry and his team had to use aerospace software called CATIA (Computer-Aided Three-Dimensional Interactive Application) to piece the steel beams together. In fact, the project was so historic and labor intensive that many of the steel workers signed their names on the structural beams. Also worth noticing is the exterior area of the Founders Room. Shortly after the opening of Walt Disney Concert Hall, tenants of the neighboring condos discovered that the glare from the building’s stainless steel heated up their rooms by as much as 15 degrees. The solution was to dull the surface and reduce glare with a new finish.

A Rose for Lilly
As you walk through the public garden, you’ll notice a wonderfully orchestrated fountain. Gehry designed “A Rose for Lilly” specifically as a tribute to the hall’s initial donor. Knowing that Lillian loved Royal Deft porcelain, Gehry and his team broke more than 200 vases and 8,000 tiles to create a mosaic for the fountain. Even with a team of eight artists working nearly seven days a week, it took more than four months to complete the fountain. Weighing about 15 tons, the fountain is the size of a large SUV. Look closely at the broken tiles. Gehry’s team of artists created individual “signature” tiles. Some of them are tributes to Gehry; others include an artist’s personal touch.

Garden Guide
The garden serves both as a public space and an urban oasis for Downtown LA. 45 trees represent six different varieties from Orchid Trees to Pink Trumpet Trees. All the trees come from Los Angeles and were installed using a 350-ton crane. The designers of the gardens scoured the city for the best trees, and often bought trees from private residences. The great views of the city represent Gehry’s dedication to the concert hall’s neighbors. Rather than towering over Downtown LA, the building sits modestly within the city. See if you can snag views of the Los Angeles Central Public Library, the Hollywood Sign and the San Gabriel Mountains to the north. 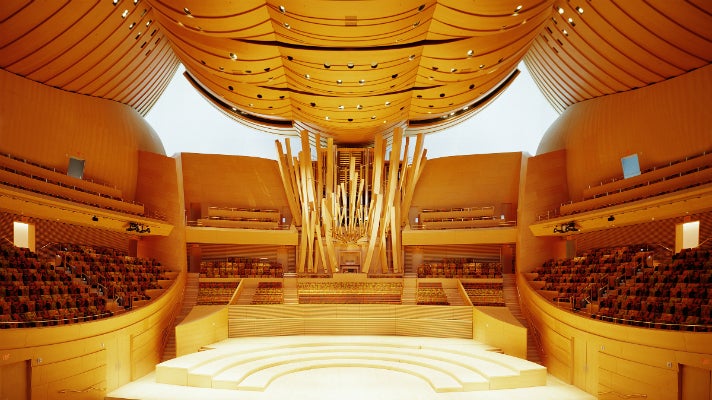 The auditorium at Walt Disney Concert Hall sits like a pearl in Gehry’s architectural wonder. In contrast to the cool steel of the building exterior, the auditorium conveys warmth and intimacy in its lofty sail-like curves and rich woods.

But where the room really creates magic is in its acoustics. The sound, so important for the home of the Los Angeles Philharmonic and the Los Angeles Master Chorale, makes Walt Disney Concert Hall one of the best in the world. Members of the orchestra don’t declare this lightly. They traveled to concert halls around the world and chose halls in Berlin, Boston and Amsterdam for acoustical standards.

In combination with Gehry’s philosophy that the hall should welcome the city, the sound creates a unique communal experience for visitors. Suitably, Gehry described the auditorium as a wooden boat that takes the orchestra and audience on a journey. In fact, in the early stages of tuning, acoustician Yasuhisa Toyota claimed that the billowing ceiling and warm woods actually improved the sound.

The “vineyard style” of the stage — a style in which the audience unconventionally surrounds the orchestra — also adds to the communal experience of the hall. As Gehry said, he wanted a space where the orchestra and the audience would have intimate dialogues with each other. It’s exactly this experience that makes the concert hall one of the attractions in LA that visitors shouldn’t miss.

The 5 most iconic soundtracks

What are the 5 most Iconic soundtracks to listen to on your VOID sound system?...

Researchers are exploring how music therapy can improve health outcomes among a variety of patient...

VOID Acoustics – Behind the scenes

Watch this video for an exclusive behind the scenes of the VOID Acoustics design and...